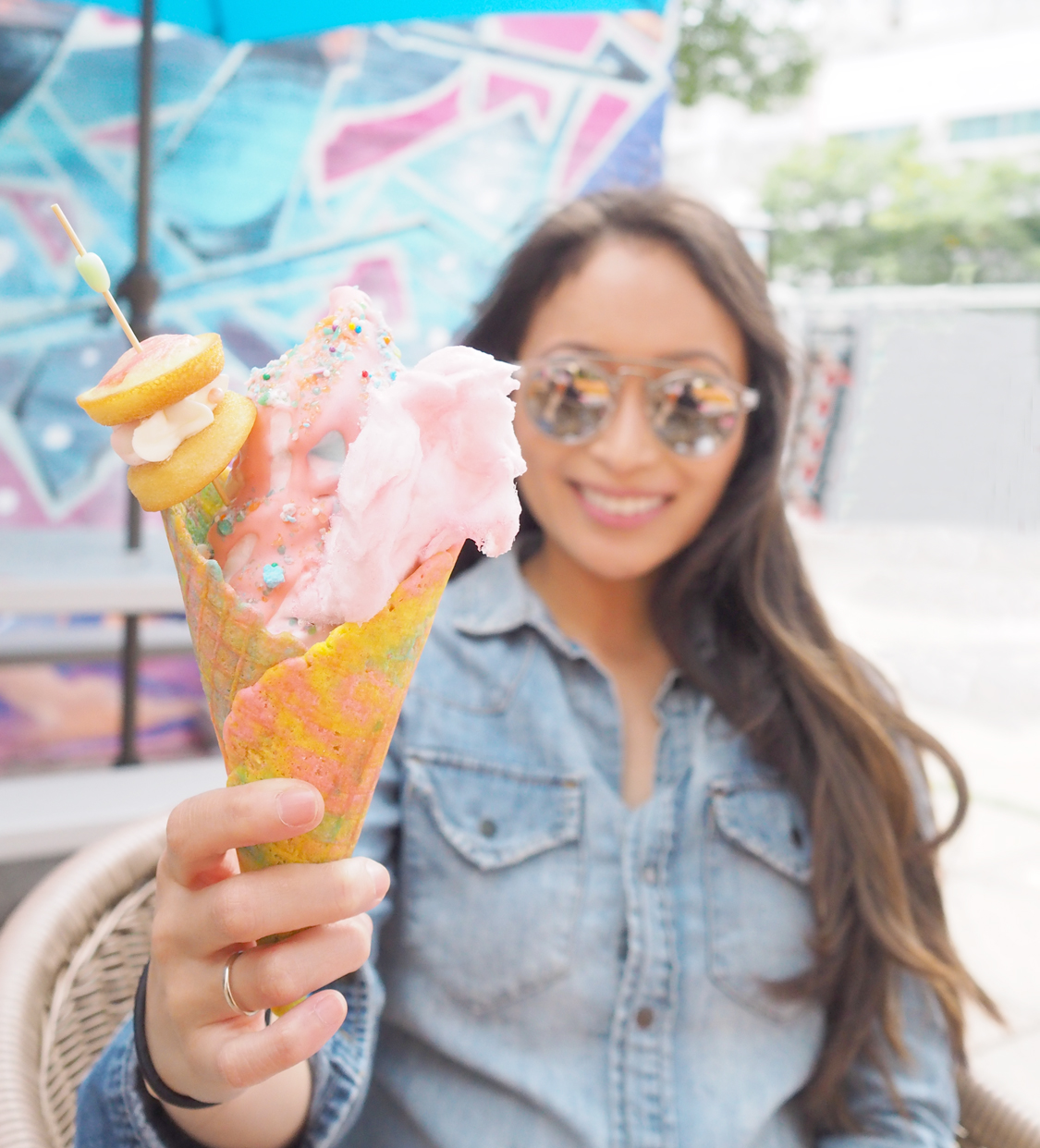 
The best part of traveling is not just about seeing the sites it's also about discovering the foods a city has to offer. When our friends found out we were going to Toronto, the one thing they said was how great the food was. As much as I love going to fancy meals, my true favorites are the mom and pop shops you find walking down the street - definitely found a few gems. 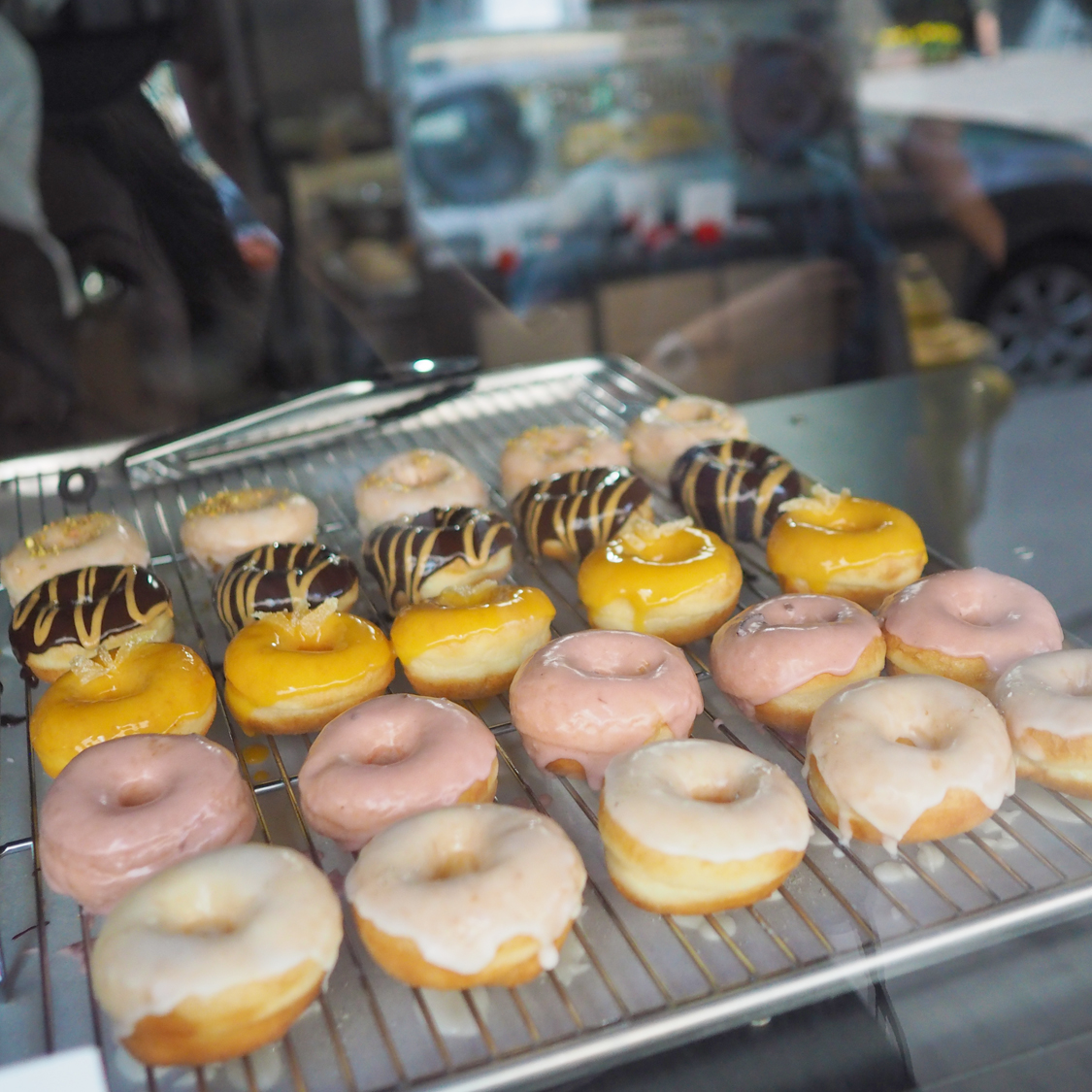 
With my sweet tooth and affinity for finding the most delicious desserts - let's start with the treats:


:CUTIE PIE CUPCAKES CO.— We were in Chinatown intentionally getting lost and stumbled upon this magical spot. Literally, everything was about sparkles and unicorns. They're known mainly for their flavorful cupcakes, but they also have these colorful unicorn lattes and ice-creams. I ordered the unicorn in a cone, which came with a strawberry shortcake mini whoopie pie, delicious fruit soft serve, cotton candy, strawberry chocolate drizzle, and sprinkles. It was like tasting the rainbow and more than what I expected. It was delicious and just what I needed during the unexpected heat in Toronto.


DIPPED DONUTS— I've never seen Aaron look at anything like it was the love of his love except for these donuts. Stopped by the new store in Kensington Market. We just had breakfast so we shared a lemon lavender donut. OMG - the zest and hint of floral mixed with sugar made this THE flavor I have been craving since I got home. Between any of the unique flavors, this is a MUST. 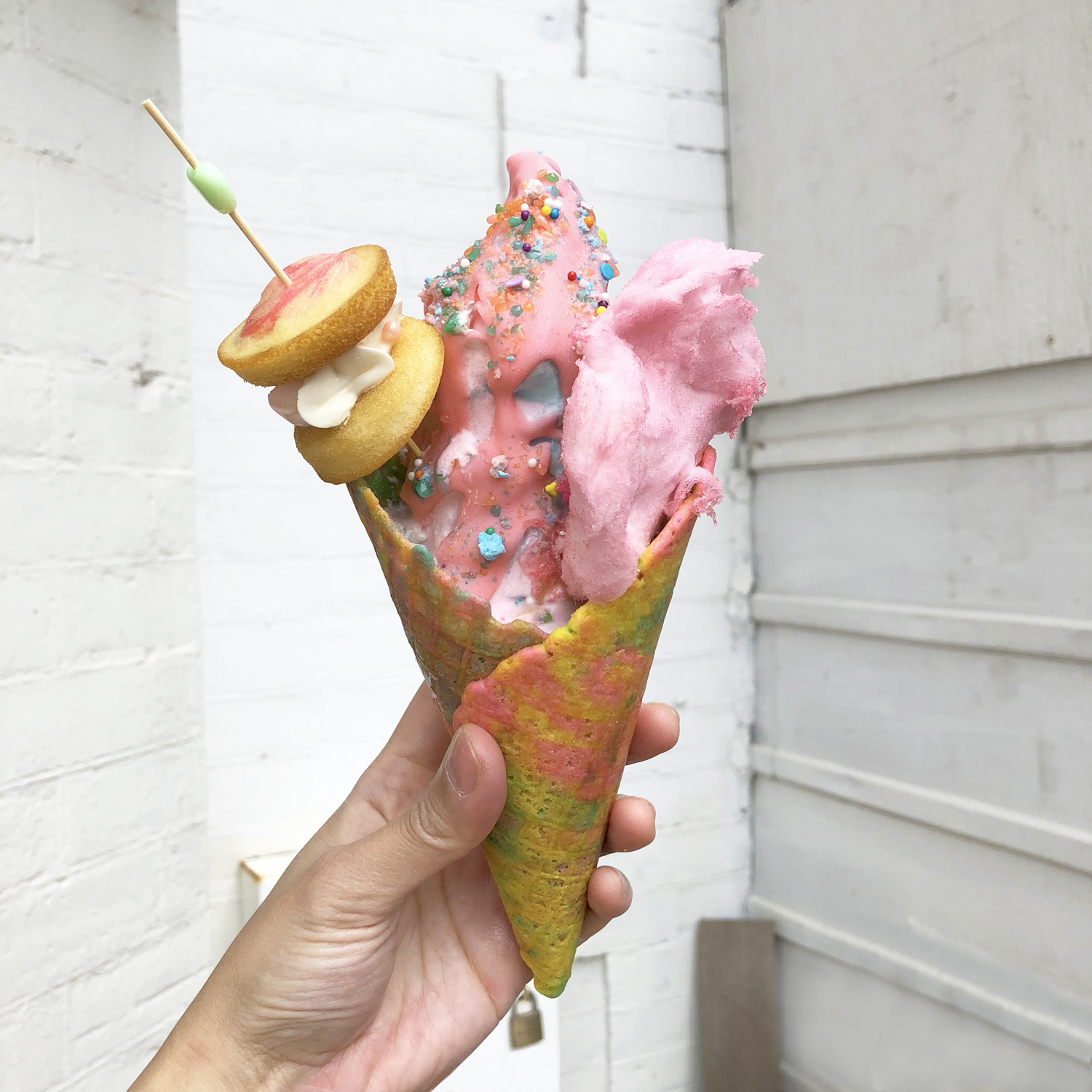 
BOBO TEA & JUICE— Tiny little shop near the waterfront and a walk down from the Rogers Centre [where the Blue Jays play] is named after the owner's pet corgy. They make everything with real fruit, which is unheard of nowadays. Aaron got the honeydew with tapioca pearls [SO GOOD!] and I got the mango slush.  Seriously, it was like biting into the fruit itself. 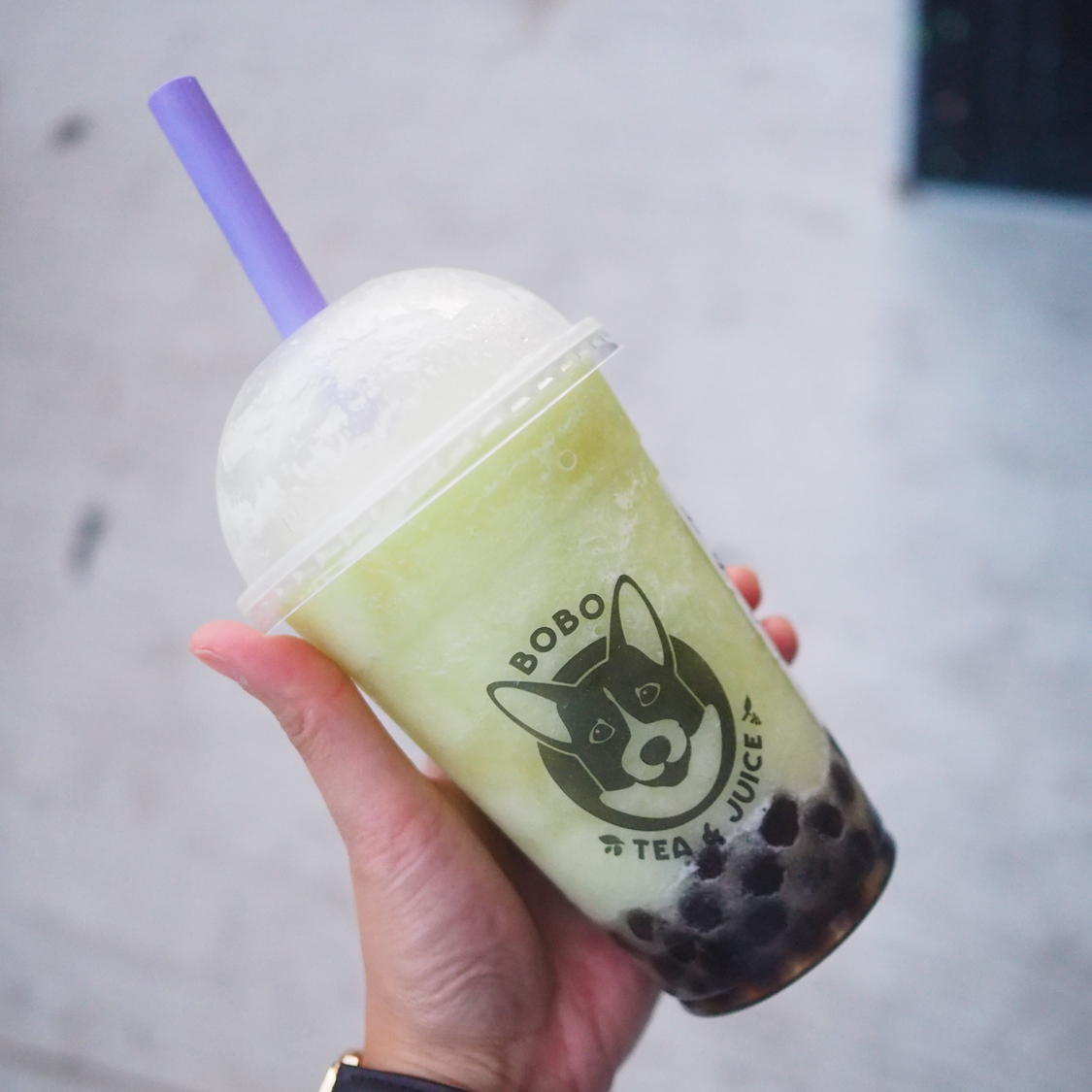 
MILK— Famous from NYC and for their cereal ice-cream,  it may look like plain vanilla but it was like tasting your childhood - a spoonful of Tony the Tiger Kellogg's flakes right before school. 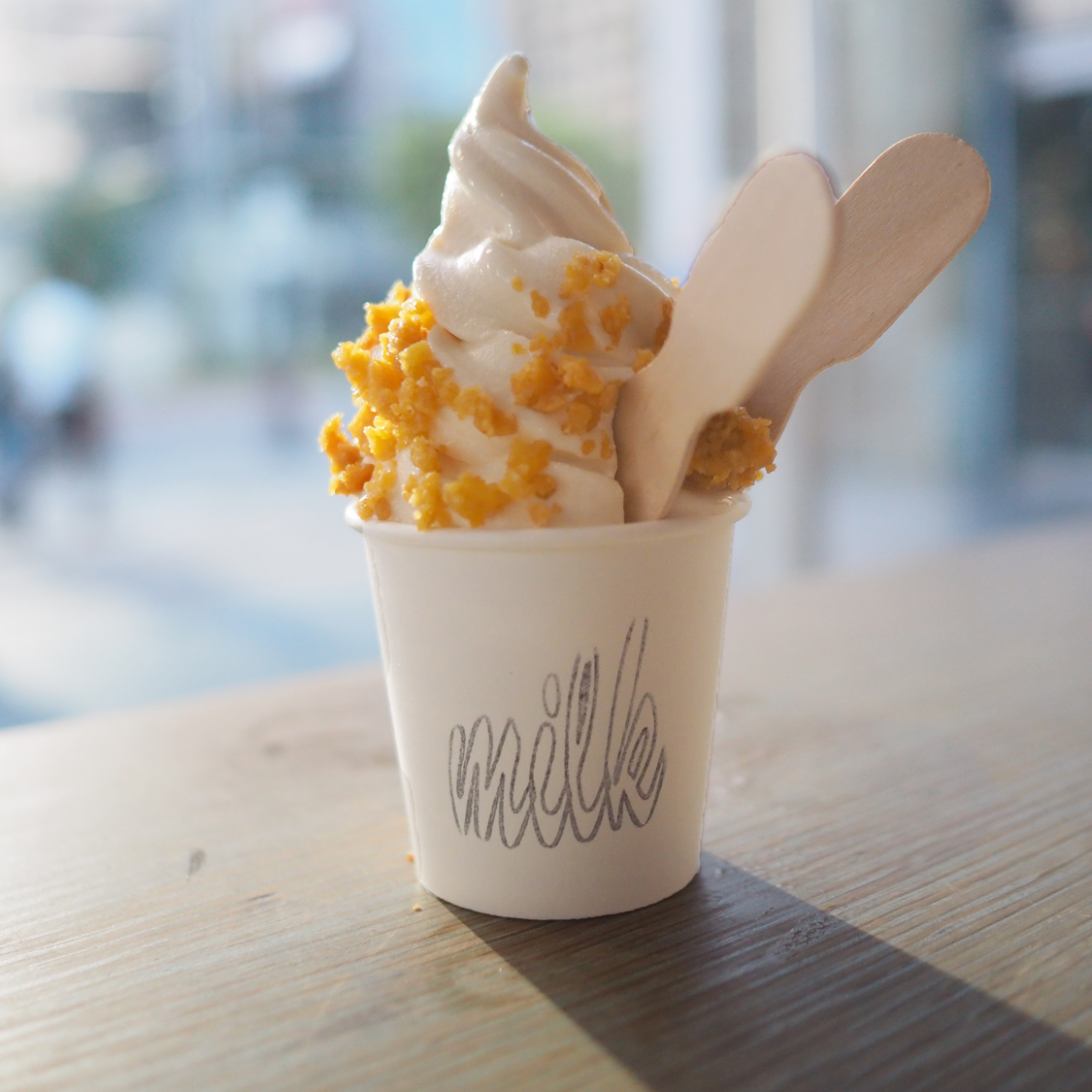 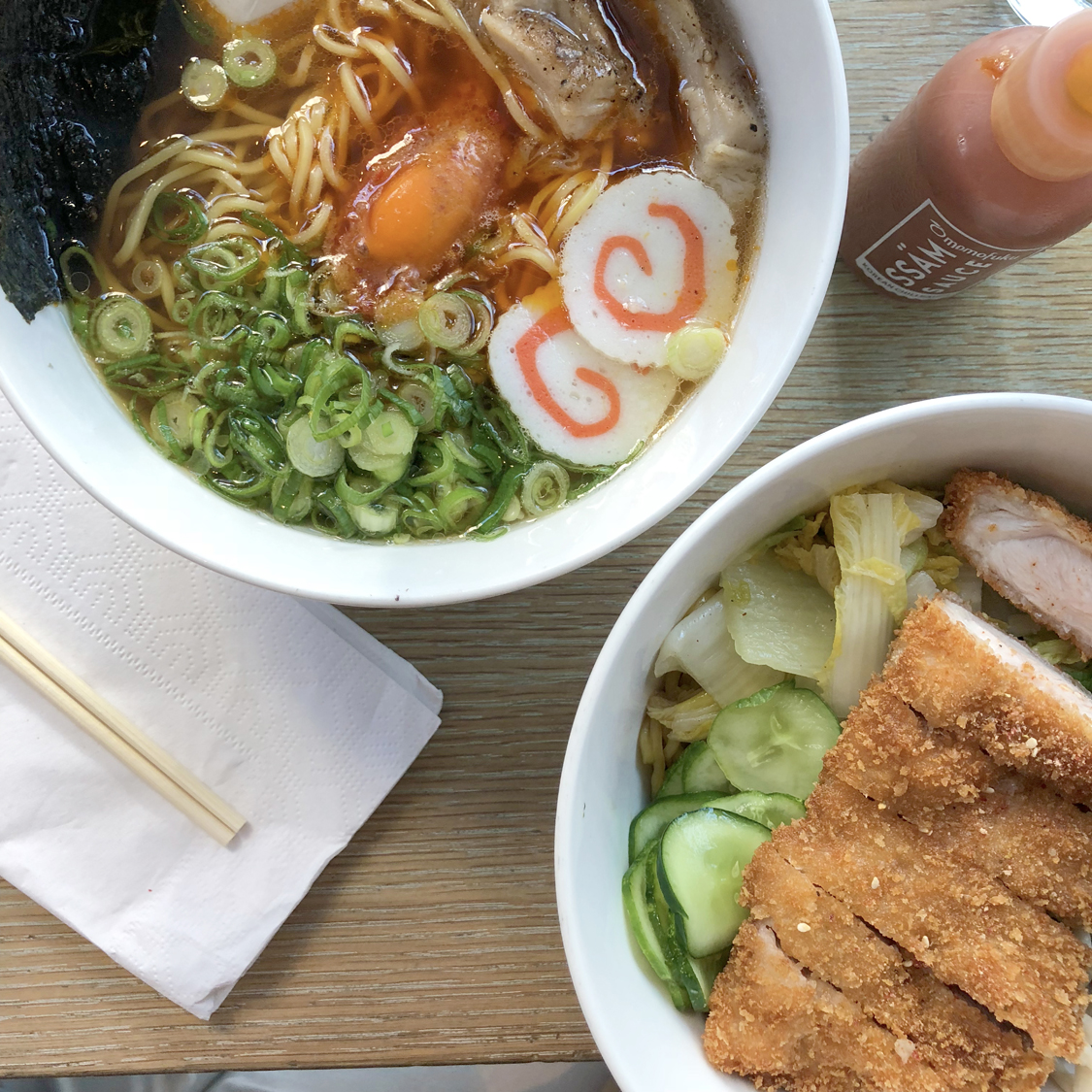 MOMOFUKU NOODLE BAR—Located below Milk, I was craving palette worthy ramen and this was one of the best I've tasted. Not salty whatsoever [like the usual ramen], the broth was perfection. I got the pork ramen and Aaron got the chicken bowl.


ASIAN LEGEND—Since living in LA and having a chance to go to Din Tai Fung whenever I wanted, it makes it really hard to think anywhere else could be better. This place was authentic and tastes like bistro dim sum. We got the soup dumplings, shrimp steamed dumplings, and scallion beef rolls. 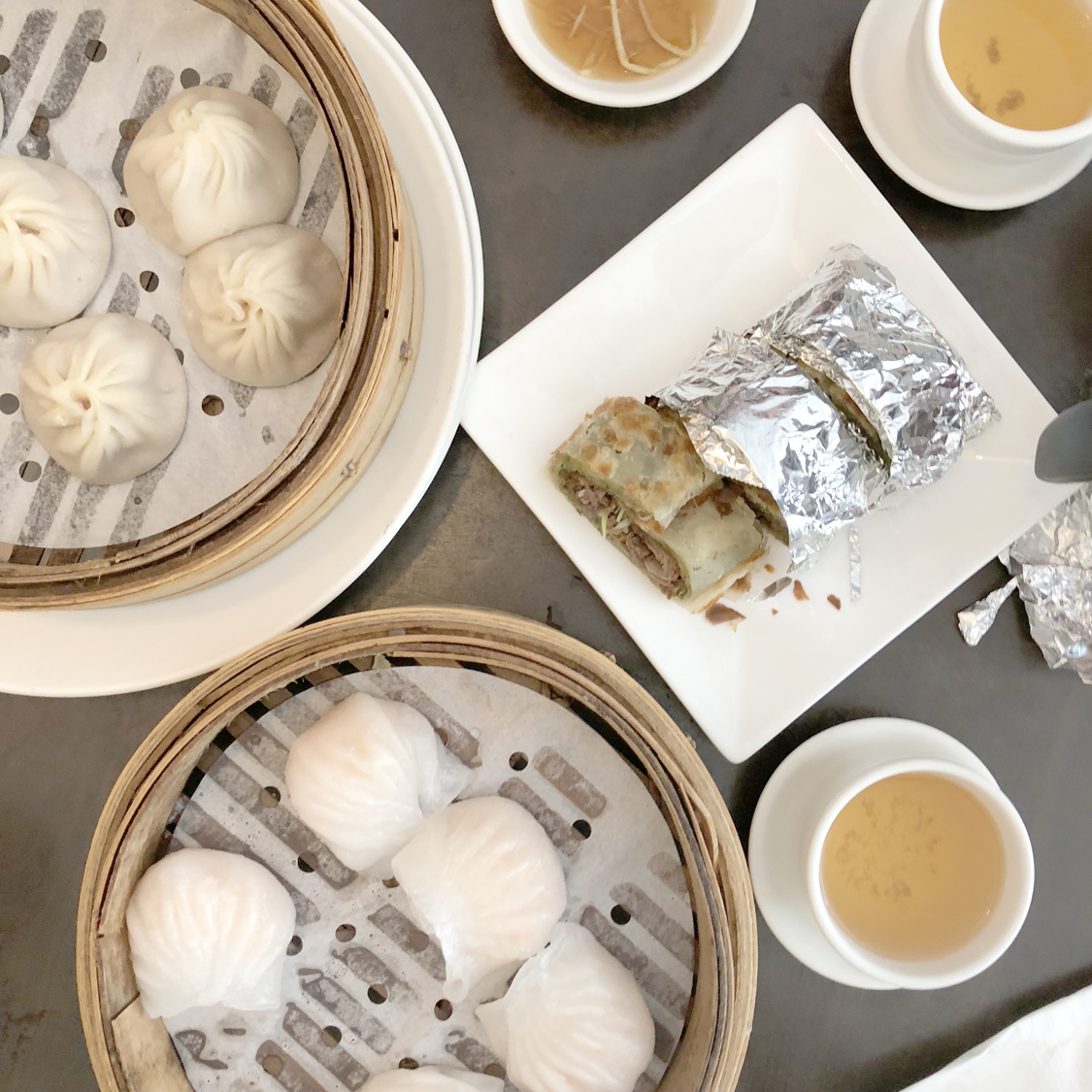 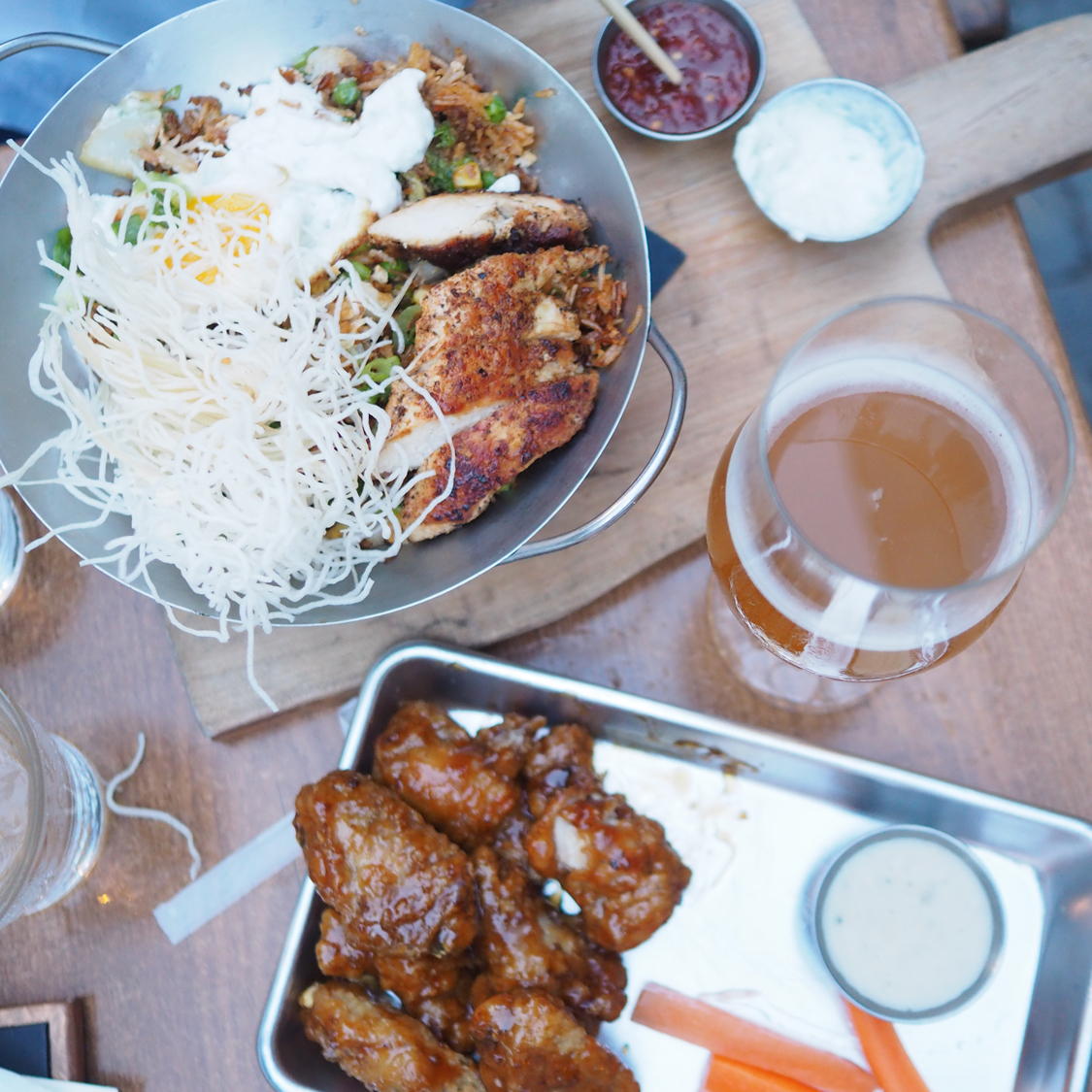 AGAINST THE GRAIN—Next to Sugar Beach and completely won Aaron over. They provide vegan options, but we opted for more meaty plates.  Aaron ordered the nasi goreng and I got the chicken wings. Don't be fooled, my wings were lightly dusted with batter and glazed with honey teriyaki. It was so crispy and reminded me of a cross between delicious Winking Lizard and tempura. My mouth is watering just typing about it!

NU BAGEL— Since Aaron's trip to Montreal, he was adamant that I taste a Montreal bagel. He was right - I can't go back to a regular one. A Montreal bagel is thinner with a bigger hole and wood-fired in an oven rather than boiled. It's less doughy - which I love. It even has a crispier "toast" taste. This place offers varied bagels and spreads. The everything bagel was our fave. 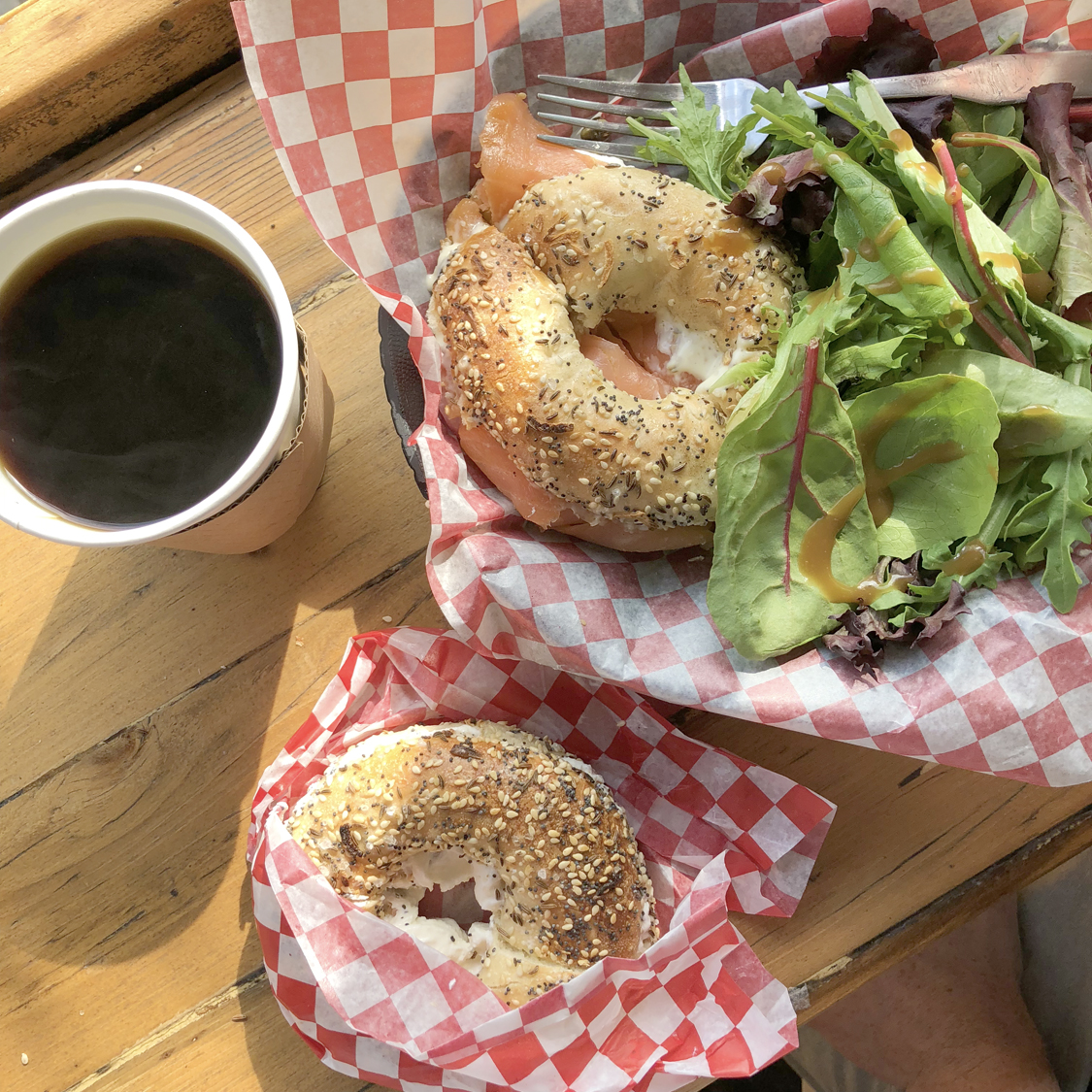 EVVIVA— Across from the CN Tower with ample patio space to admire the view on a perfect day. The waffles with the Canadian maple syrup made my morning. I should have bought a bottle before we came home. Not to mention their hash browns were crispy with a hint of spice.

I don't know if it was because it was a different country but everywhere I ate impressed me - it was all so flavorful and fresh, making me want to go back pronto. If you ever get a chance to go, let me know what you try! 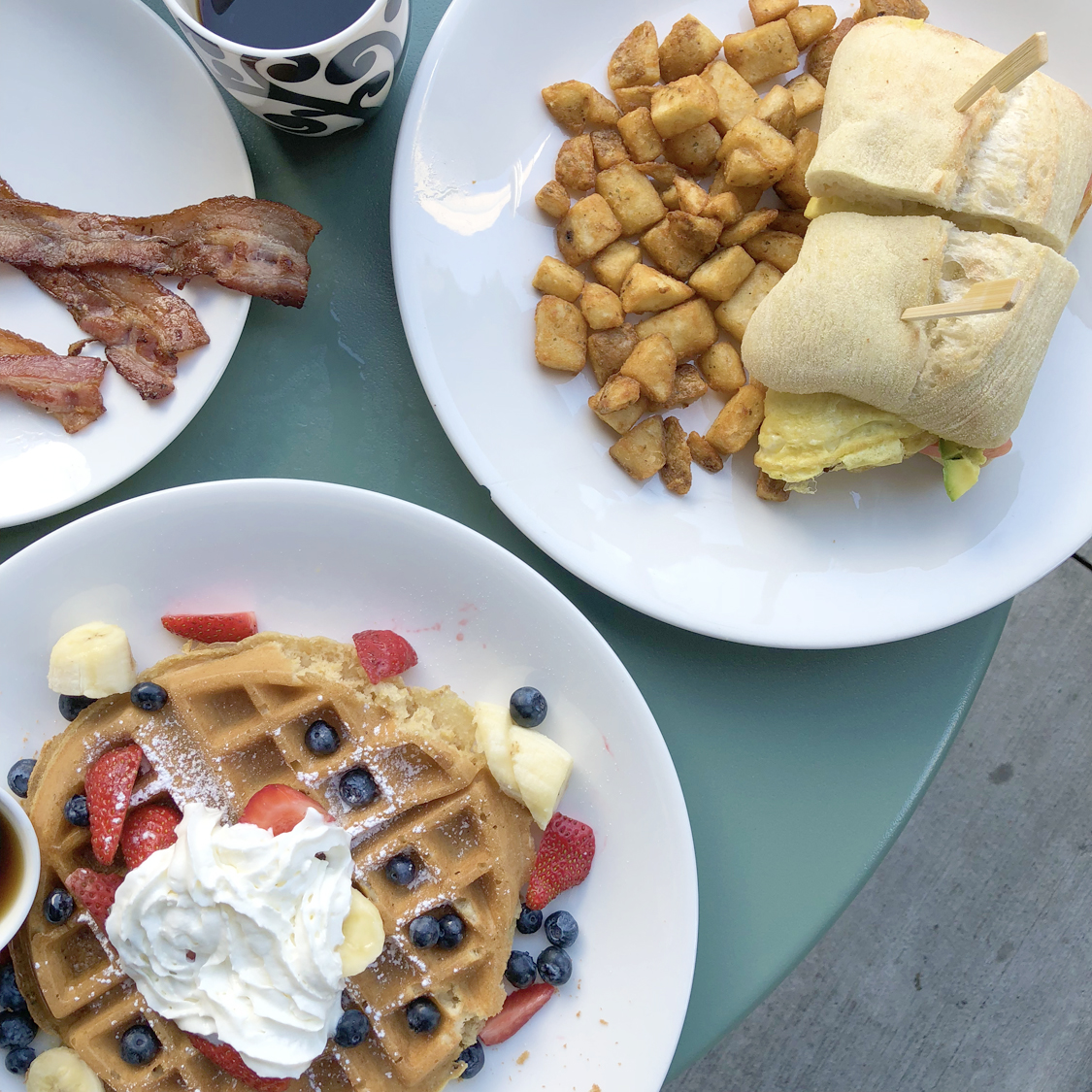 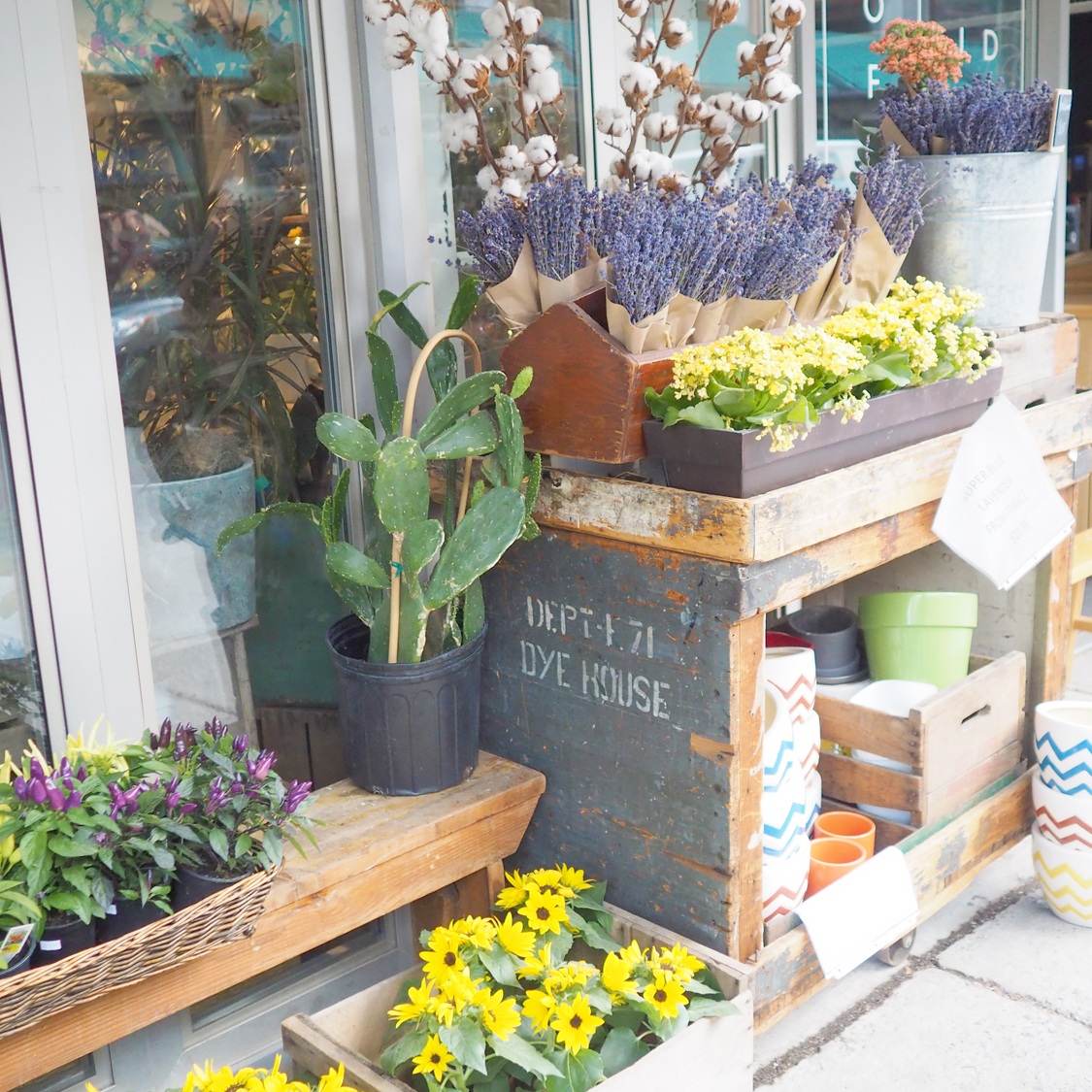 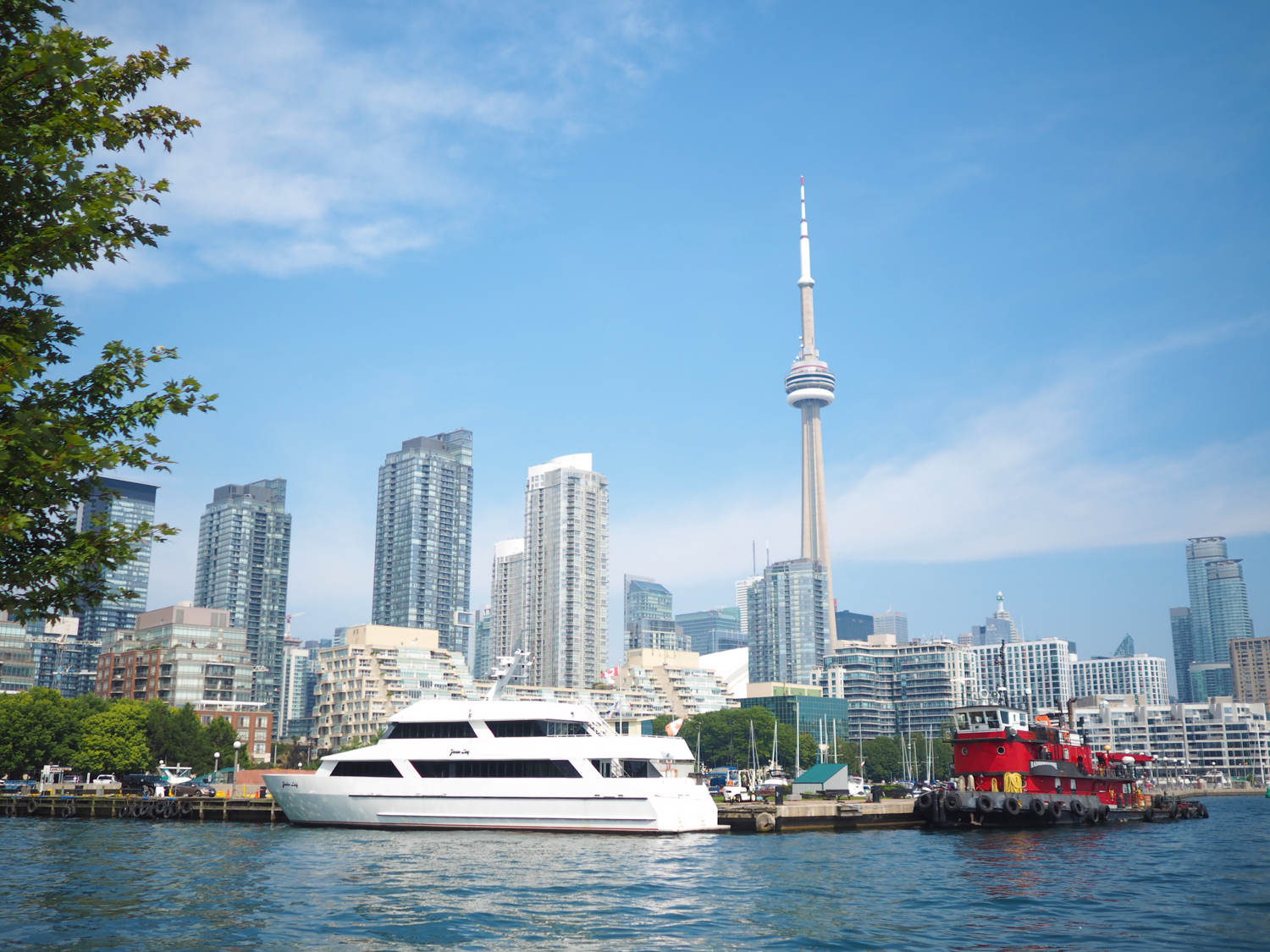