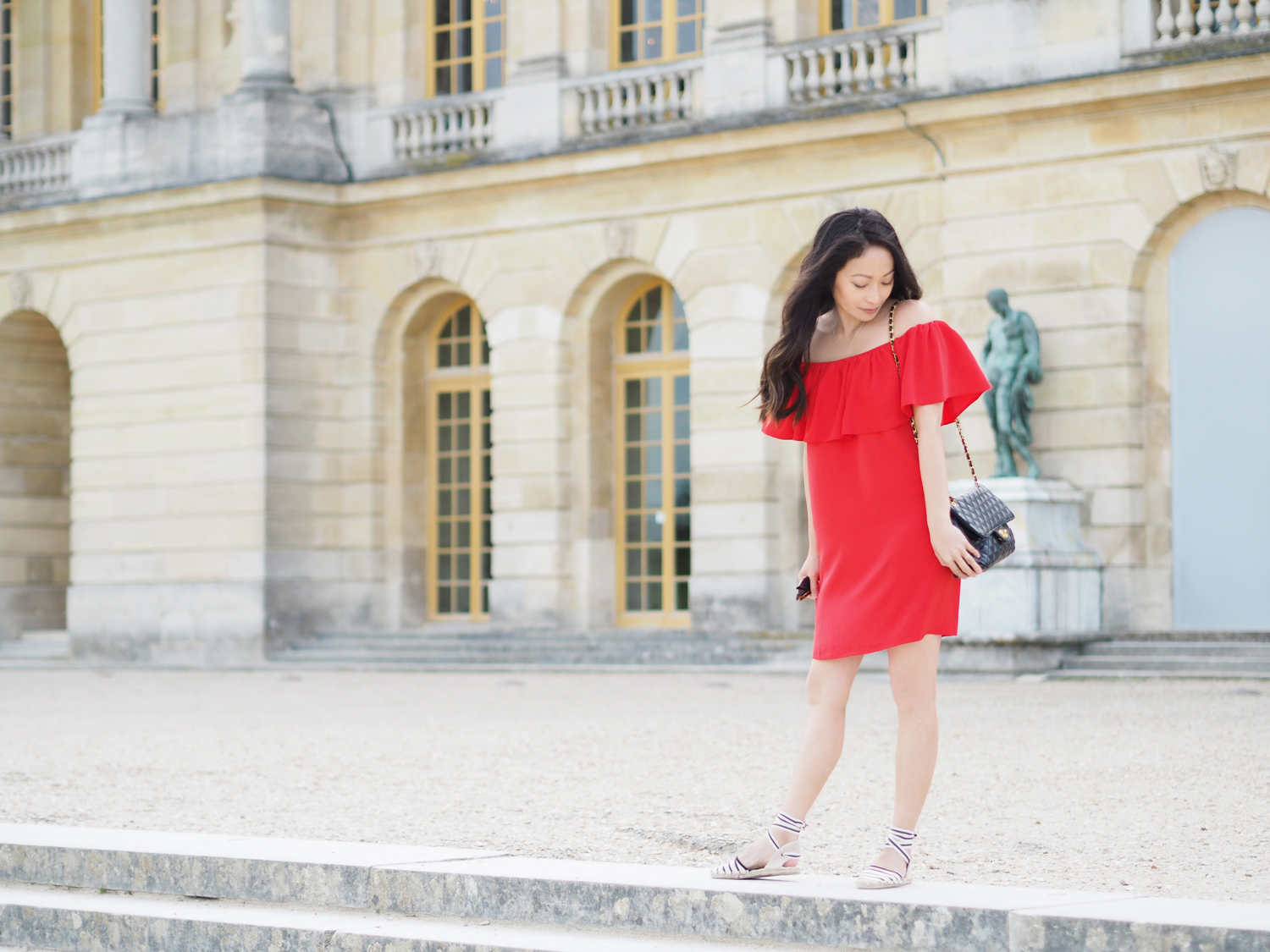 This is my second time in France and my first time at Chateau de Versailles. I have to be honest, the place is so beautiful that it makes me regret not coming the first time! The palace grounds is so big that at one time it was the size of the entire city of Paris! There is also numerous things to do, especially if relaxing in the gardens and eating a gelato is your idea of a good time [we can also be bffs]. 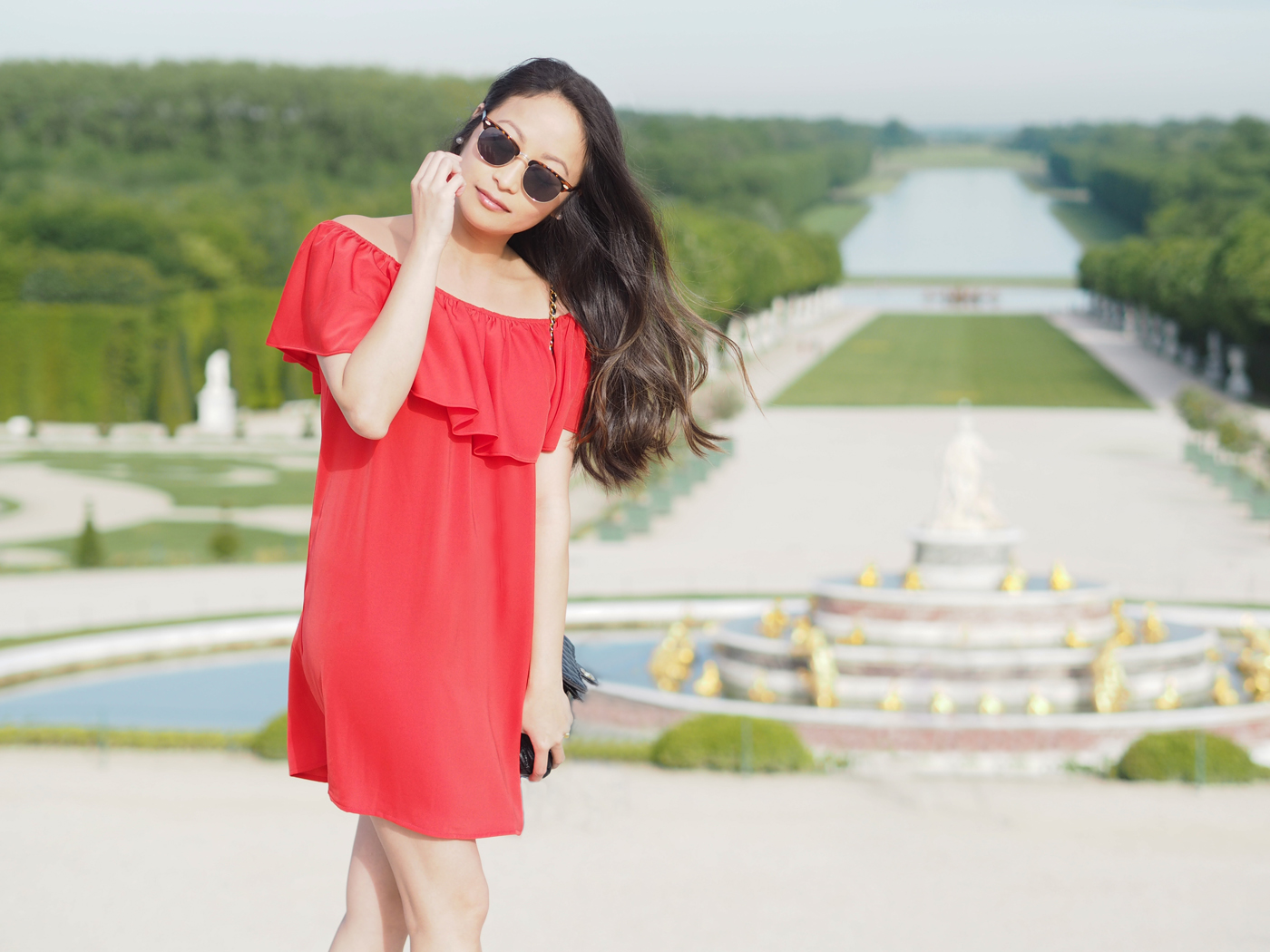 
We woke up really early, since most days the palace itself opens at 9am and we wanted to walk around the gardens beforehand. Make sure to dress appropriately as there is no air conditioning anywhere on the property. We knew it was going to be hot, so I wore this little red OTS number that I got for $20 during our shopping spree [definitely excusable if all you packed were blazers, trench coats, and boots]. Also, because I thought a place this lovely deserved a pretty summer dress. The fabric is soft and thin, which is a must on outdoor excursions under the sun. It does run big so size down, I didn't mind though since heat and tight clothing don't mix. I wore my striped lace-up espadrilles to add a little feminine trend minus the heels and finished the look with my classic go-to tortoise framed sunnies. 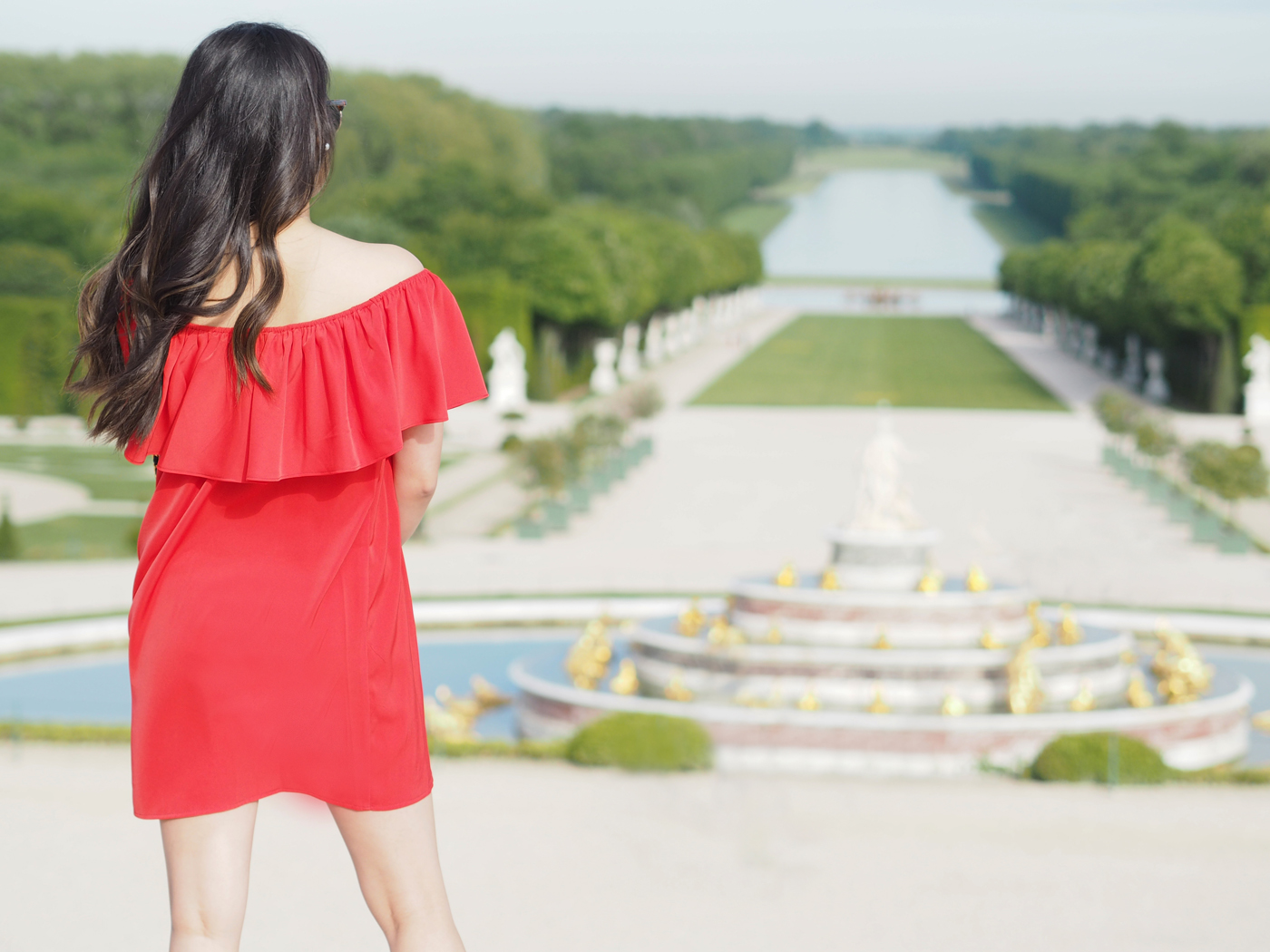 
As I was saying, go about an hour and a half early to fully enjoy walking around the gardens. When you first walk up to the palace gates, you think, it's just as ostentatious as the Louvre, then you see the "backyard". The palace itself is only the tip of the iceberg. When you walk around, your eyes are wowed by the masonry of the numerous fountains and carved statues, not to mention the carefully manicured topiary trees and garden mazes! 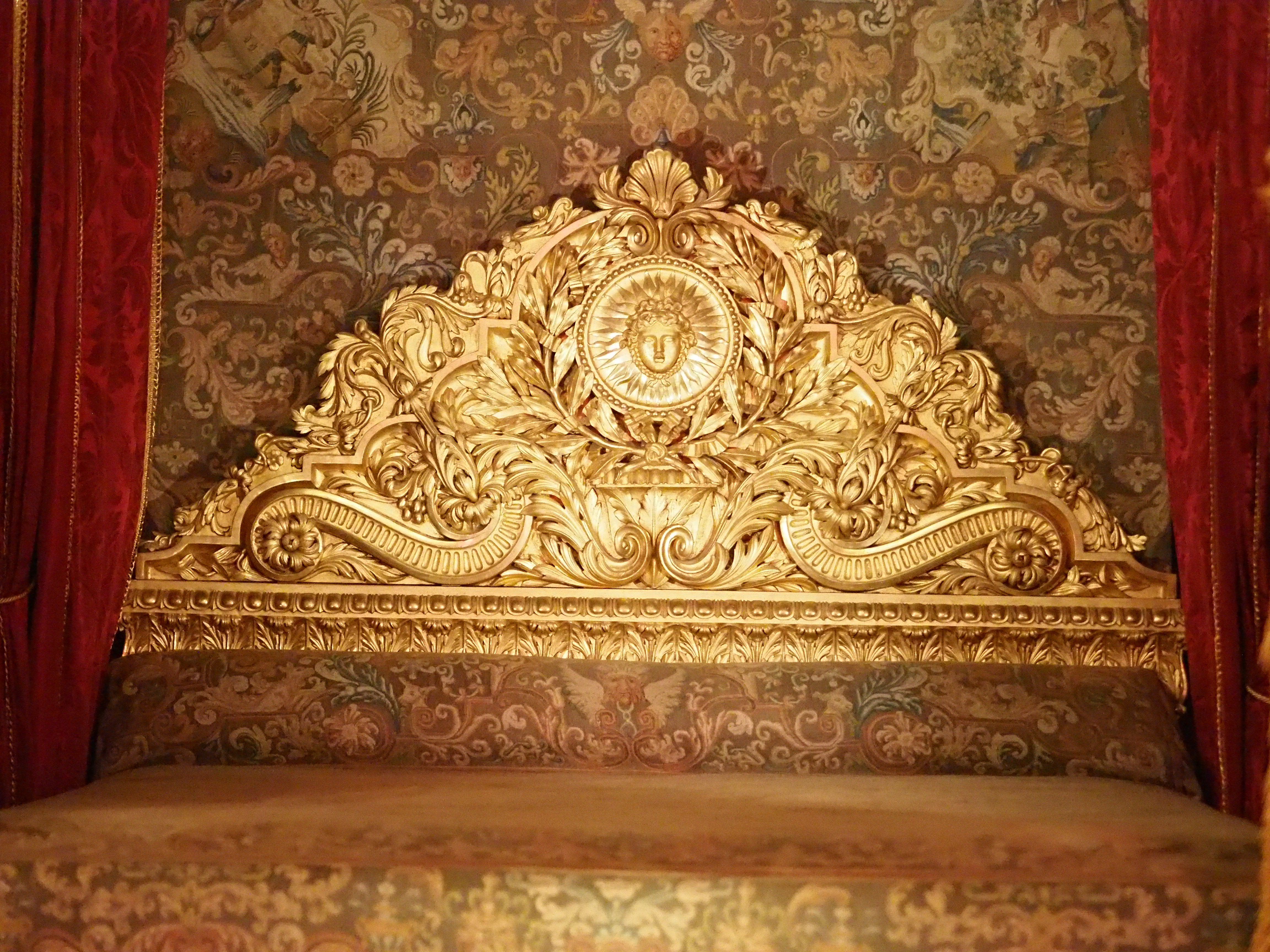 BE IN LINE HALF AN HOUR EARLY: If you plan to go into to the palace, get in line 30 minutes before it opens, because the line gets very long and security takes extra time. You'll walk through all the rooms, including King Louis XVI's sleeping quartes [picture above]. 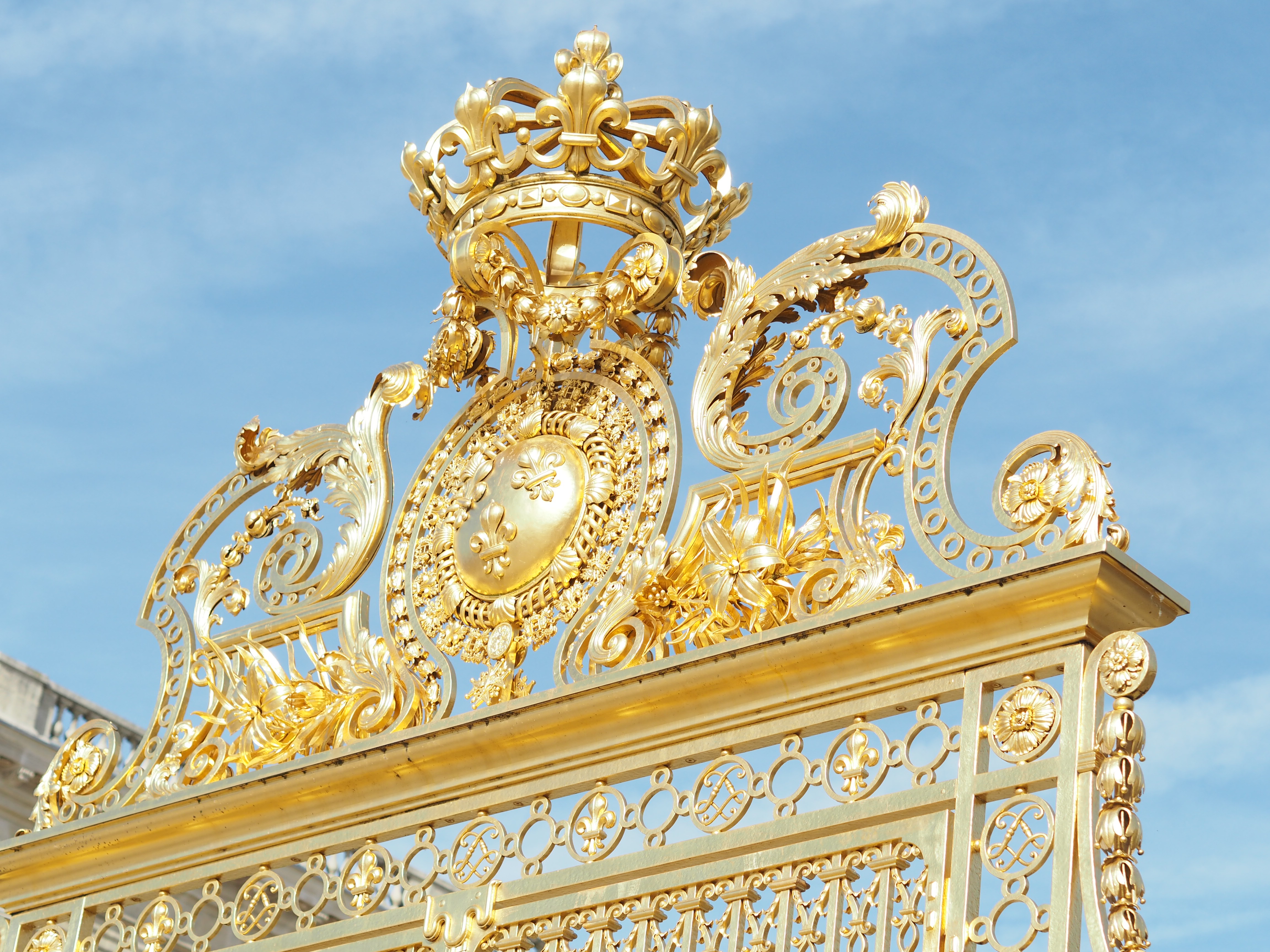 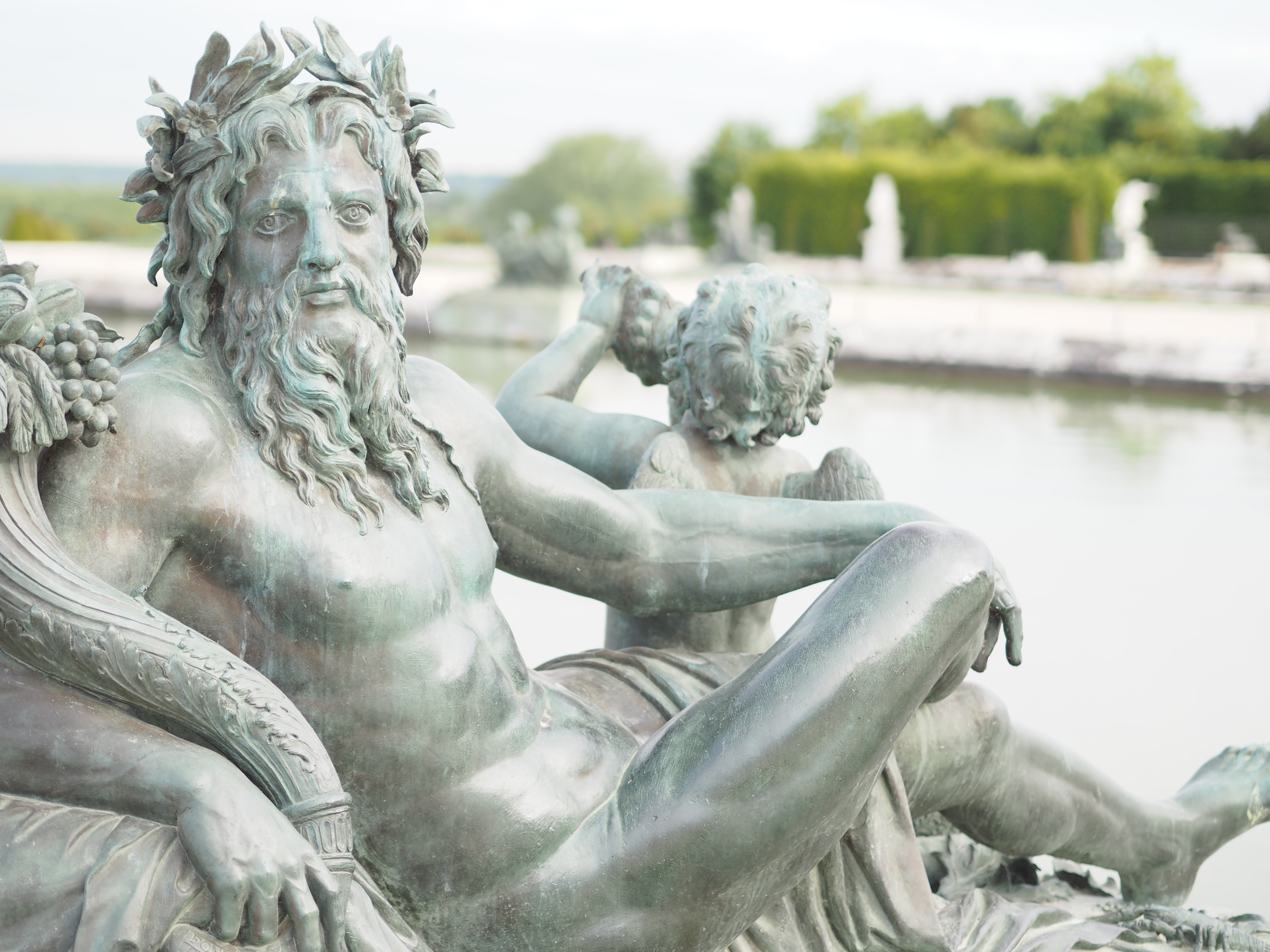 GRAND TRIANON / PETIT TRIANON: Two chateaus in which the King and Queen would spend their days relaxing. It's one mile south of the main palace. Take the Petit Train [7 euros], which stops at every sight on the property, including the Dragon and Neptune Fountain as well as the Grand Canal. 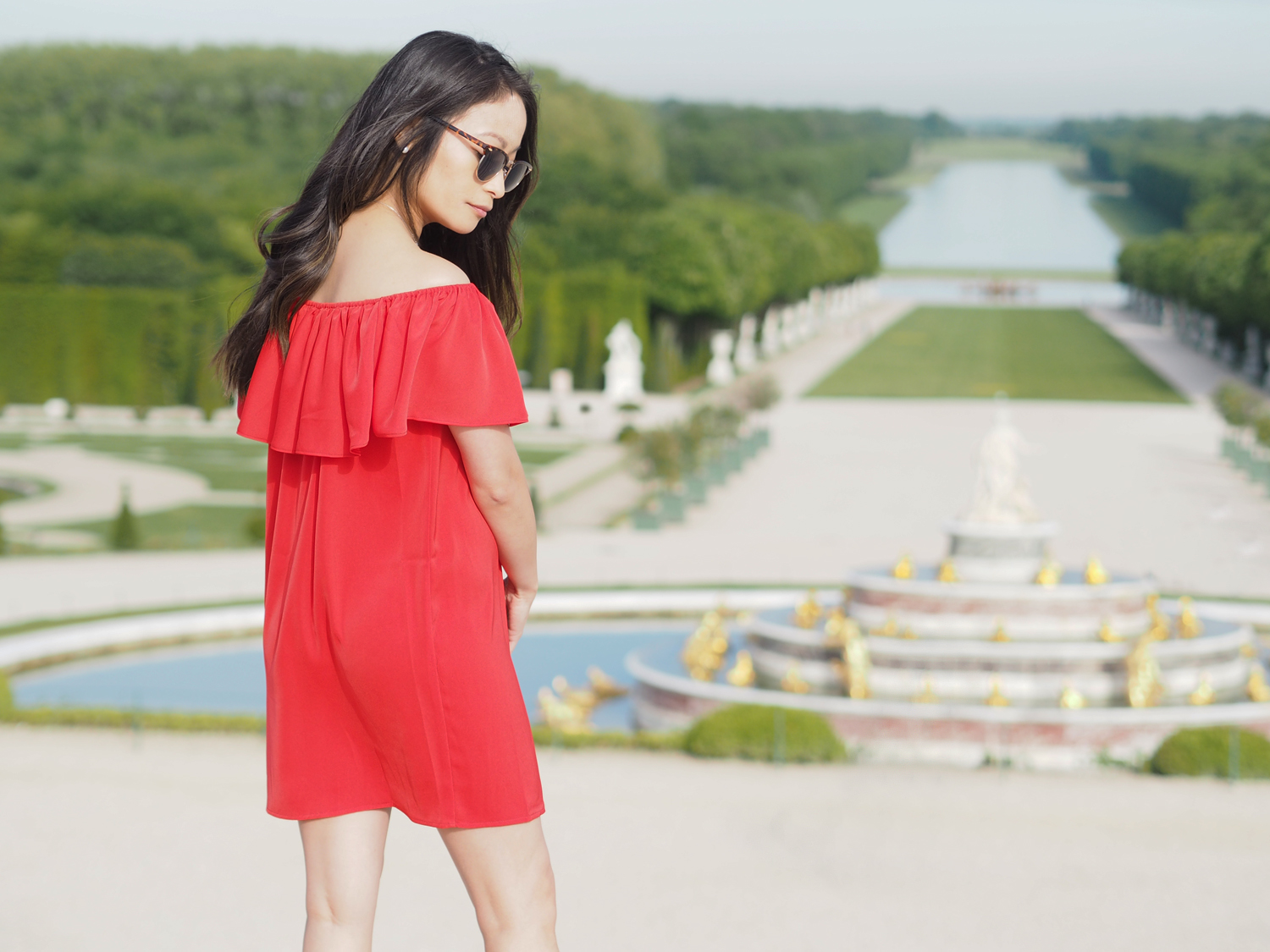 GRAND CANAL: Spans a little over a mile, can be compared to one of the Great Lakes in the northern U.S. [exaggerating of course, but it's definitely sizable]. It also once housed a giant ship and countless gondolas! Now, tourists can take a canoe and relax on the water. We decided to seat next to one of the benches as we ate lunch at one of the cafes on the property rather than row our energy way.


If we had more time, we would have rented the golf carts [35 euros/hour] and drove to the menagerie, however we only had the  morning. Plan on making Versailles a day trip, because it literally is  one of my favorite places to go in France! 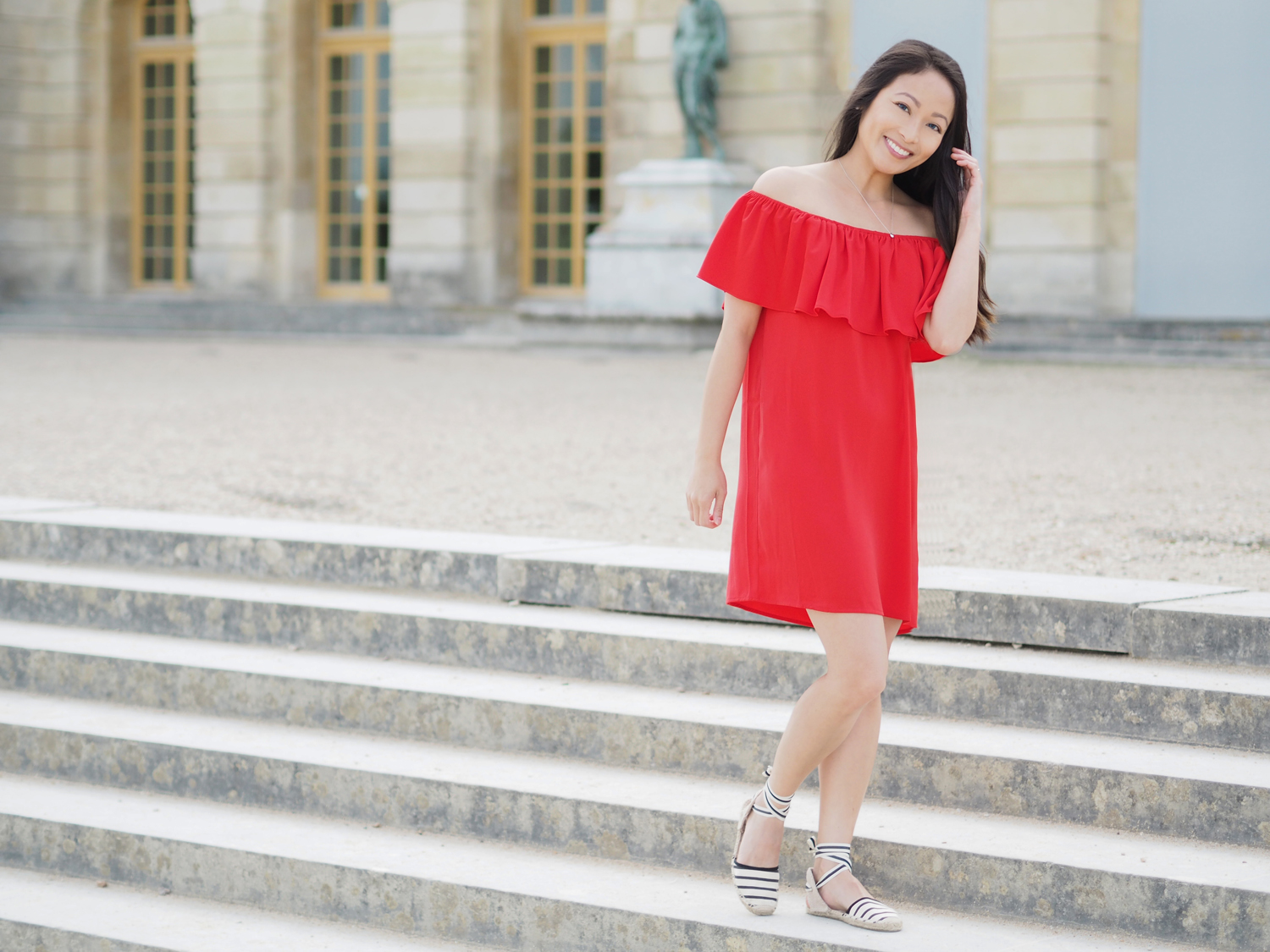 
Style Tip: To add shape to the dress, wear a belt [half an inch thick] around the waist. To dress up the outfit for evening wear, I would pair these with patent heeled stilettos. 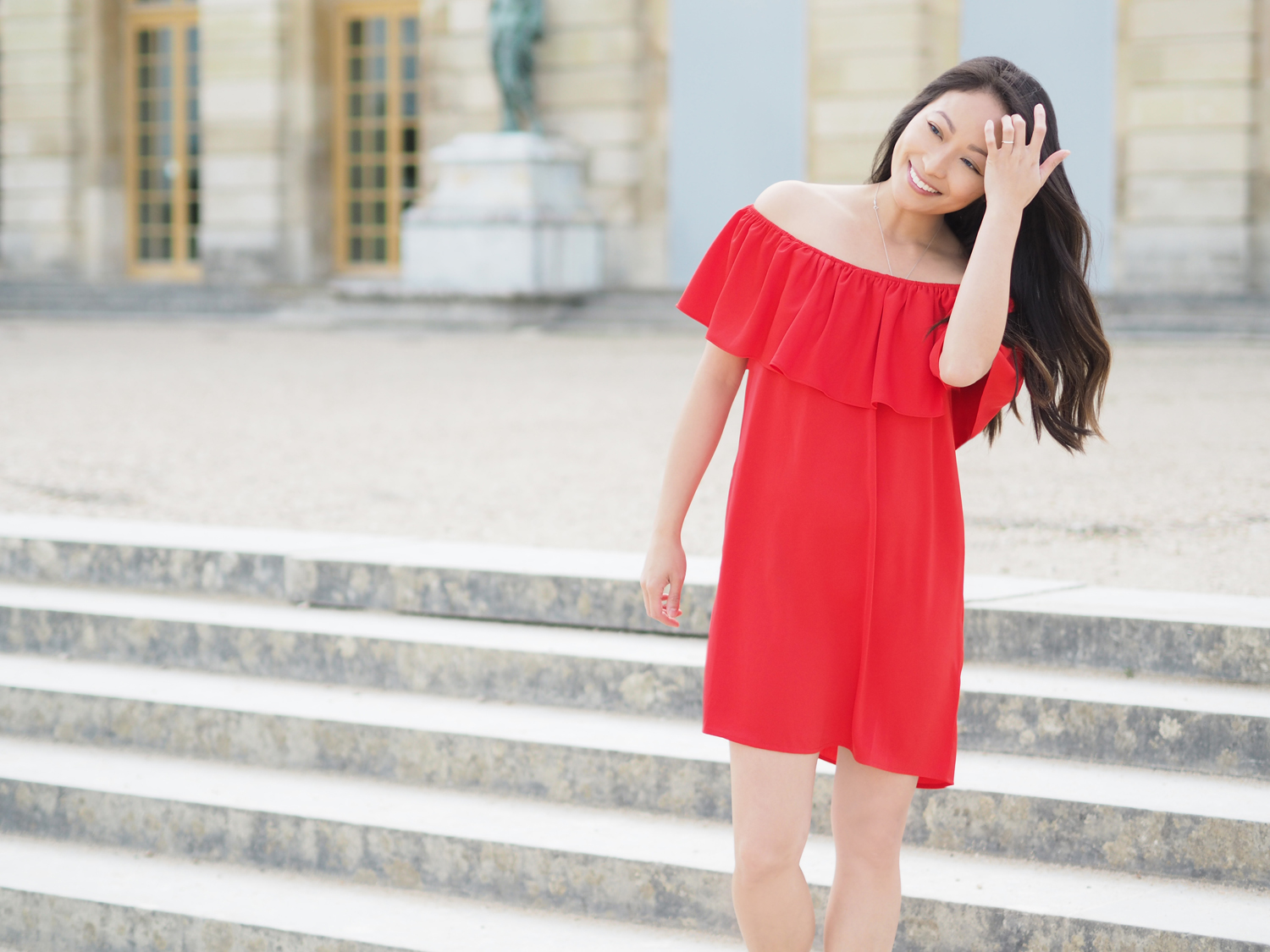